a woman's sometimes journeys in a world of need and plenty

Travelling from Bangkok to Ayutthaya by train is a simple matter: Go to train station, buy ticket, get on train, an hour or so later, arrive destination. End of story….But wait. That is the fairytale version and this is real life…

In reality, I shouldered my dusty backpack at 8:10 a.m. and eased out into the 34C heat. Armed with a map and with sweat trickling down my spine, I plodded to the bus stop where 12 TB (50 cents CN) bought me a ticket to the train station and a debate, conducted in Thai by the driver, his female assistant and another female passenger, about whether or not I was on the correct bus. The words “train station” spoken in English and on google translate in Thai did not eleviate the debate but a thorough perusal of my map settled the matter with smiles and sage head nodding. My “ThankYOU!” with emphasis on the second syllable, produced a chorus of similar thankYOUs punctuated with laughter while at each stop the assistant strode to the door, sang out the route to those waiting, then pointed to me and commanded, “No you!”

Six stops on the “No you!” changed to “You!You!” and I scrambled out, waited for the world’s longest traffic light (while marvelling at the heavily clad Thai biking team waiting on the opposite side) and crossed the street to the train station. 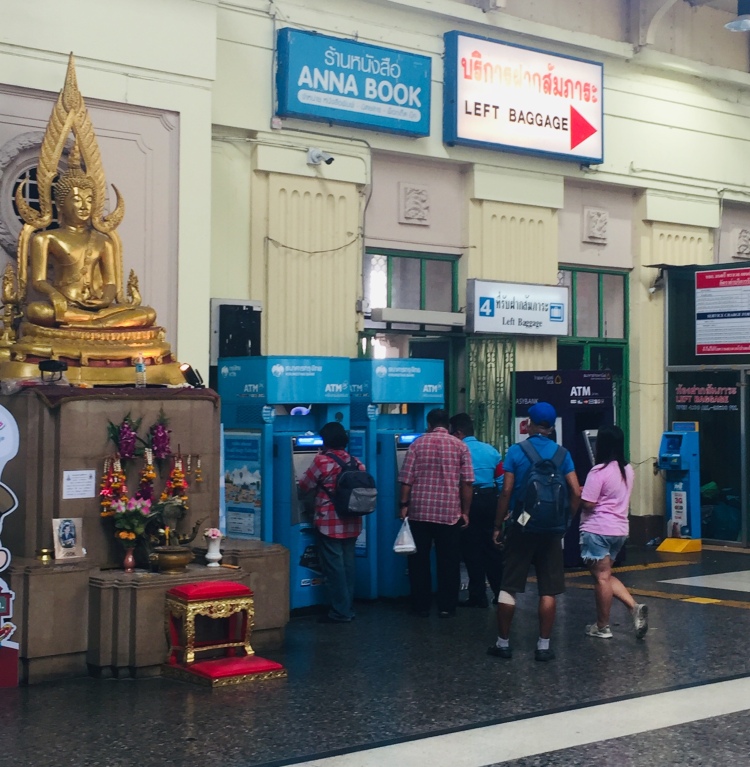 Now here is where I made my fateful error. Initially my plan was to catch the 10:50 a.m. express but, in a moment of delirium, chose the 9:25 a.m. local instead. The 15 TB cost should have been my cue to upgrade, but, well, after all, life is an adventure.

The six pink cars of train 201 lurched uncertainly from the station promptly at 9:25 a.m. as the temperature neared 38C and myself and an elderly Thai woman wrestled our window wider. Already we resembled wilted cabbages and I was asking myself questions like, “How could I make an ice pack that fits in my bra?” and “I wonder if there is still ice on the lakes back in Canada?”

These musings took on greater urgency as the minutes and then hours ticked by and train 201 failed to hit anything resembling speed. (Meanwhile the grandma beside me earned a gold medal minding her increasingly cranky grandson who regarded me with unsmiling fascination).

Finally at a little country station our little pink train decided it could do no more and ground to a permanent halt. No announcement was made, but a general rumour swept the train until we all piled out to sit on the station steps and to plunder the area for anything cool, cold or generally lukewarm. An enterprising youth scootered up, his cooler loaded with popsicles causing a short feeding frenzy (yes, yours truly was first in line). Reports circulated that a rescue train could arrive at 1:00 or 3:00 p.m. We wilted on, a crowd of generally silent human puddles.

(Above: Somewhat ironic (as it turned out) sign by railroad tracks)

By 12:30 p.m. a train was imminent – a slow surge to the tracks and another wait. Finally, a train. Not a mirage. A real train. The mantra in my brain turned to the swimming pool I knew to be waiting at my accommodations in Ayutthaya. I dared to hope.

Now – the surprise. I have travelled the world and know it to be a big place. But at any moment it will amaze you with its minute attention to detail.

You see, while waiting to board the rescue train, the young Thai man beside me asked, “Where are you from?” When I replied, “Canada,” he exclaimed, “Me too! Vancouver!”

“My hometown is Ayutthaya, but I used to live in Sudbury,” he said. “I worked at My Thai Palace restaurant.”

The world made small, at a sweltering station in rural Thailand.

Tonight as I sit poolside (also not a mirage – a real pool – and I swear the water sizzled when I leaped in earlier this afternoon) in Ayutthaya, accompanied by a herd of racing geckos and a dive-bombing bat, I gaze at the moon and know it is the same moon that you will soon see, half a world away, from this huge, small, amazing planet that we call home. I also know how grateful I am. For everything.

(Top:Poolside at Nature Home, Ayutthaya; Bottom: Moon over me and you)

P.S. There are several daily trains travelling between Bangkok and Ayutthaya. Though I am thankful for my experience, next time I will no doubt choose one of the 200 TB ($8.40 CN) air-conditioned versions of this trip 😊. I am also in the early stages of patenting an ice pack bra-liner. I think it could really catch on.

2 thoughts on “Bangkok to Ayutthaya, Thailand by train – a story and a surprise…”